Justin,
After 7 years together, 5 of those married, I still can't believe that our adventures are only starting!  I can't wait to see what is in store for us in the future.  I love you. 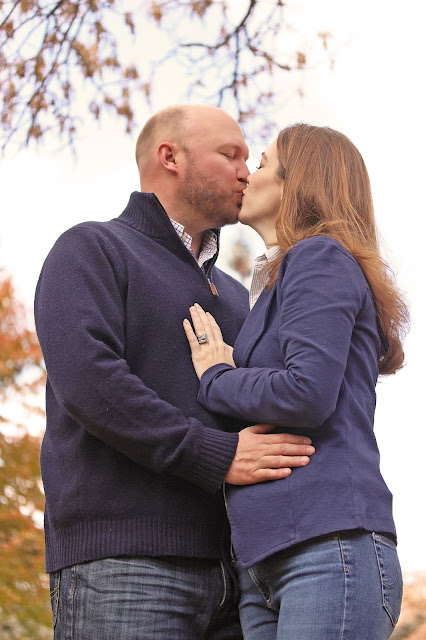 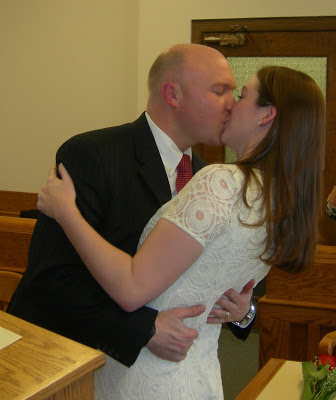 Our wedding!  Yes, it was in a Courthouse (it's both our second marriage) 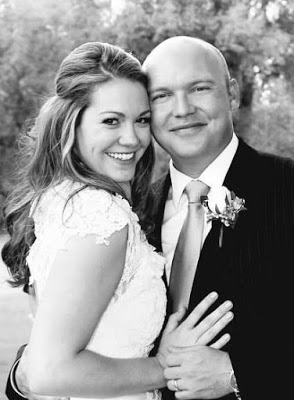 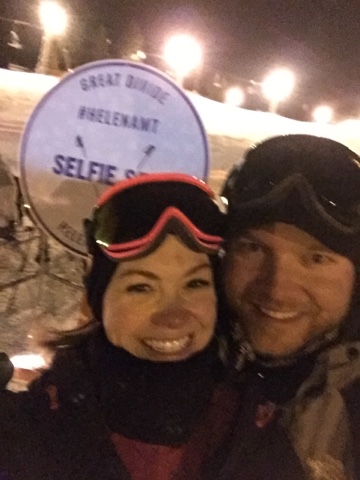 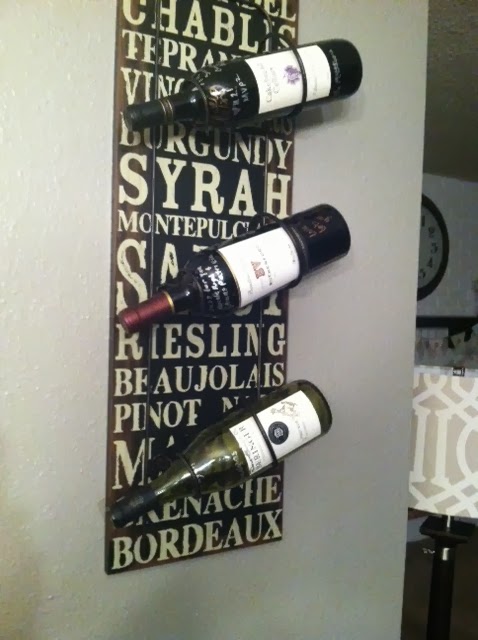 Our 5 year wine bottle will have to wait a few months.  We can't wait to celebrate 5 years AND two babies this May!!
Posted by Wigdiggity No comments:

As any pregnant woman knows, being comfortable is paramount when you're growing another human.

Granted, this is only the second time I've worn maternity clothes, I've found myself turning to a few favorites over and over again. 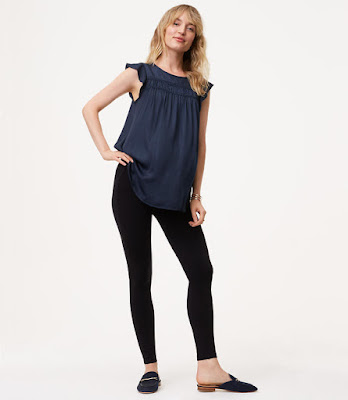 I love the ones I bought in 2014 more than my most current pair.  However they are still BEYOND comfortable.  They also hit my three requirements:
1. Thick enough to 'act like pants'
2. Over the bump band (I love the support)
3. Looks brand new after getting washed weekly.  Sometimes bi-weekly. 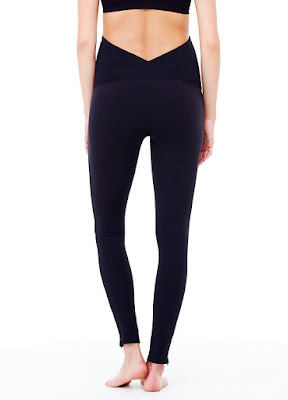 I needed workout pants, and I love that these can double as regular leggings too.  They also hit my three requirements.  As much as I LOVE the crossover panel, I do not love the zipper ankles.

2.
Designer Jeans
I bought mine from Poshmark (because I'm all about a deal)
I found these AG Skinny Jeans and they fit 100 times better than the jeans I picked up from Old Navy and Target my first pregnancy. 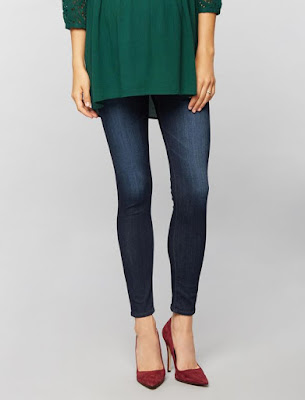 I love these jeans so much.  They wash amazingly well and are so flattering! 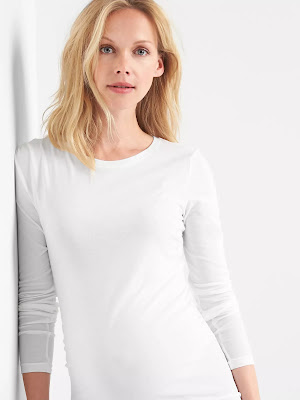 I have one in white and one in black and wear each every week.  A basic long sleeve T Shirt is a staple for every wardrobe and I love these the best.  I have a long torso, so the extra length is truly appreciated by this mama! 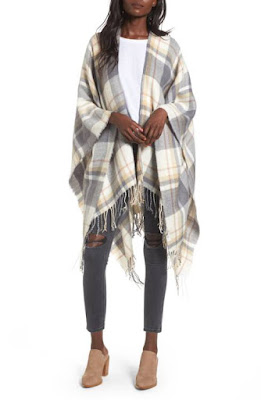 I love this one from Nordstrom. It's SO SOFT!  I've picked up a few others from Amazon, Target, and TJMaxx as well.  They are so versatile and such a fun alternate to cardigan's.

It's a mouthful to say, but so so heavenly.

Between the Montana dry air and growing bump, I love nothing more than using this lotion in the morning and still feeling hydrated come 5 o'clock. 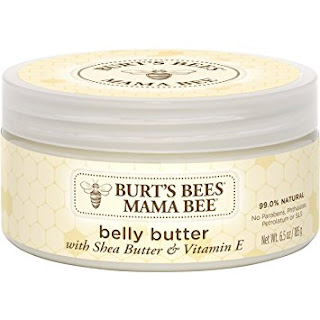 P.S.  No stretch marks are a pretty sweet bonus :)

Email ThisBlogThis!Share to TwitterShare to FacebookShare to Pinterest
Labels: Five on Friday, Pregnancy 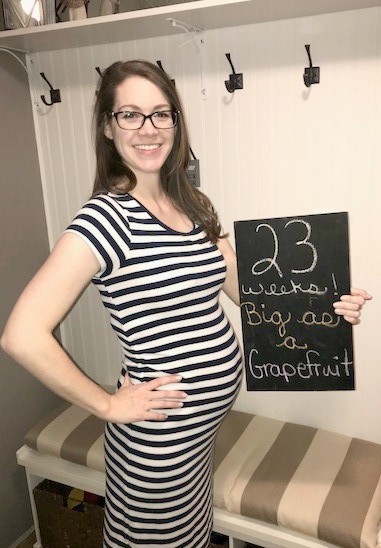 Baby size:  size of a grapefruit

Weight gain:   5-7 pounds.  Even while sick I feel like I ate my weight in ice cream this past weekend.

Sleep: With #wiggydiggy sick, I've been up a few times every night all week.

Food cravings:  No cravings.  I am eating now, but it's never a whole lot.  I'm getting full very quickly.
Though, I want ice cream every night - Haagen=Dazs Java Chip please and thank you.

Anything making you queasy or sick: Cooking meat.

Workouts: Nothing really this week, but I have big plans to hit the gym every day at lunch this week.

Things that suck:  Sick while pregnant.  The W.O.R.S.T.

Things that don't suck:  Spending 4 days in bed with my baby boy.  Even though he was sick, it was so nice to cuddle and nap with my little bug.

23 weeks with #wiggydiggy
(holy crap I was blonde!)
Posted by Wigdiggity No comments:

I ended up having a 5 day weekend.  Justin is currently having a 4 day weekend.
After 5 days cooped up in the house with #wiggydiggy, I am so excited to be back at work today.

Thanks Influenza A.
Not. 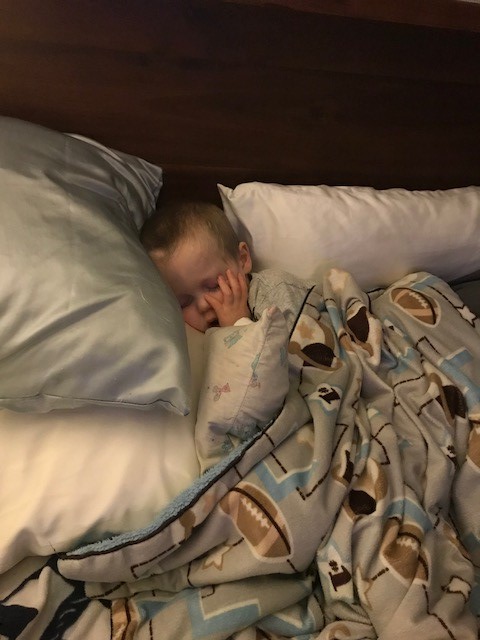 Poor bug :(  It broke my heart how badly he felt.  Nothing but cuddles for four days straight.

Poor nugget felt the absolute worst Friday and Saturday.  He has bursts of energy now, but they are quickly followed by coughing fits and the need to lay down for a bit. 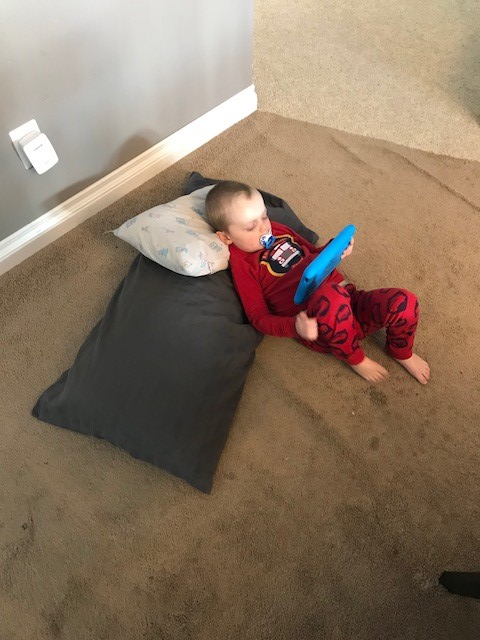 (Can I mention how much I hate our floors?  I hate them.  HATE THEM)

He's had more screen time than we normally allow.  However, that's the perk of being sick.  We are loving the new Kindle Fire that #wiggydiggy recieved for Christmas.  I did have to spend a solid 30 minutes going through and setting parental settings on apps and videos.
Yes, I know, we're strict.  He's only allowed a very limited number of shows and apps.  I love the timer feature too.  He already knows that when he gets the 'orange screen' his time is up.

I'm so grateful that the only symptom I had was a head cold.  Tamiful seems to have knocked it down and Justin lucked out with no symptoms at all.

I have big plans to Lysol the entire house again tonight.

Fingers crossed that our little guy is back to his normal self by tomorrow!
Posted by Wigdiggity No comments: 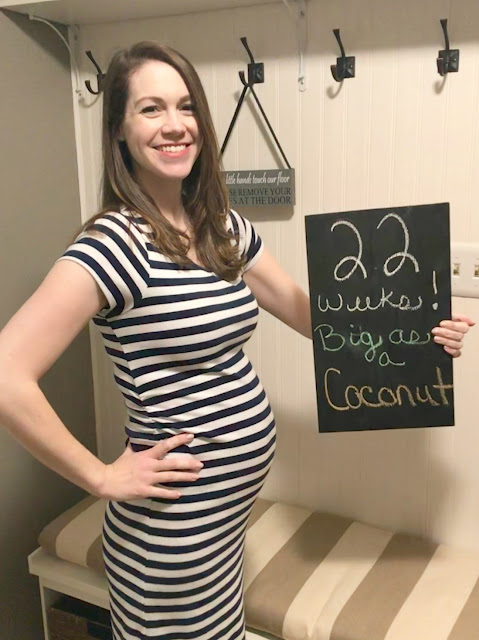 Baby size:  size of a coconut

Baby's progress:  starting to look like a miniature newborn!

Sleep: Pretty good.  Looks like middle of the night potty breaks are here to stay.

Best moment this week: Alone time on Sunday!  Justin took #wiggydiggy skiing and I spent a few hours in blissful quiet (doing chores and such, but still)

Food cravings:  My appetite appears to be back!  Still not super interested in most foods, but when I'm hungry, I'm eating good portions!

Belly Button - In or Out:  Half and half.  The top half wants to poke out, but mostly lays flat.

Anything making you queasy or sick: Cooking meat.

Things that suck:  Having such a limited wardrobe right now.  It's partly due to the freezing temps, so I'm really looking forward to some warmer days so I can bring some variety back.

Things that don't suck:  Having #wiggydiggy so interested in what the baby is doing and wanting to play with them.

We hosted the family on Christmas Eve and had a wonderful time.
Justin decided we'd go look at Christmas lights the night before so we wouldn't miss them this year.  I am so grateful we did.  By the time everyone left on Christmas Eve, our boy was D.O.N.E.

I tried a new mashed potato recipe in the crock pot and it was divine.
(Not the most photogenic food though) 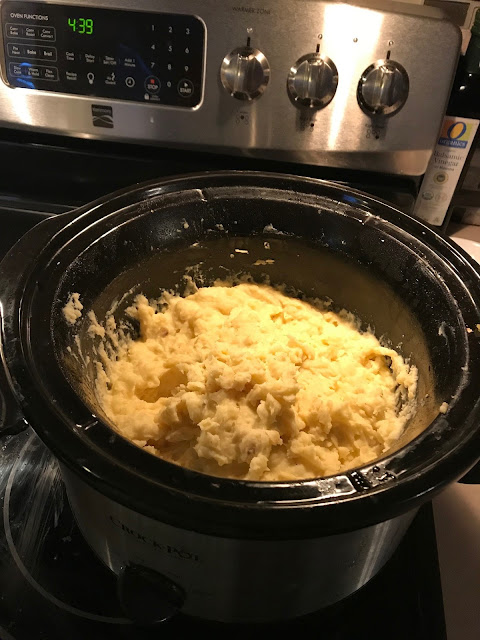 I used the recipe from this pin
I've never put cream cheese in mashed potatoes before, I've always been a sour cream kind of gal.
But I'm a convert.  Oh My Lanta were these good.

I also made this delicious punch
I combined a few recipes I found online and it turned out amazing.  I'm sure you could make it alcoholic with champagne instead of sparkling cider.
1 bottle ginger ale
1 bottle cranberry juice
1 bottle Apple Cranberry sparkling cider 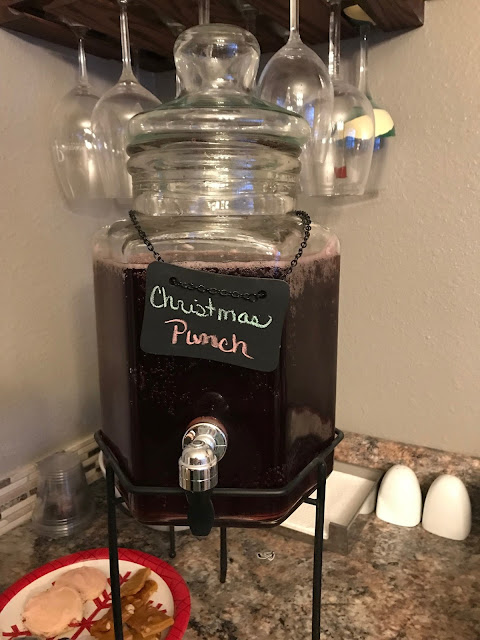 Christmas Morning was a riot.
#wiggydiggy slept in
He NEVER sleeps in!
I woke him up at 7:30 because I was too impatient to wait any longer!  Haha. 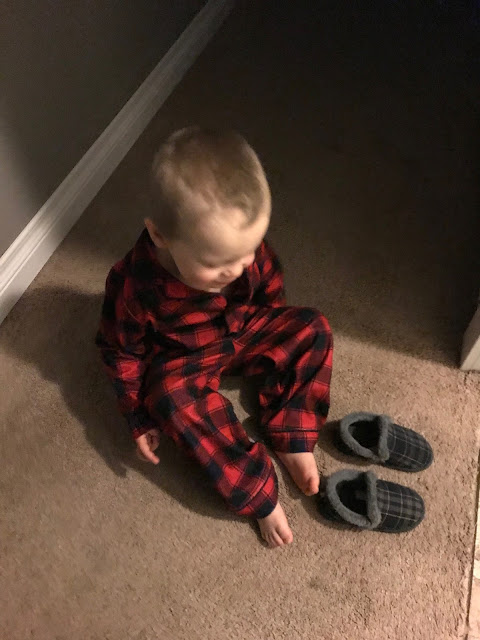 Waiting patiently for Daddy to turn on Christmas lights 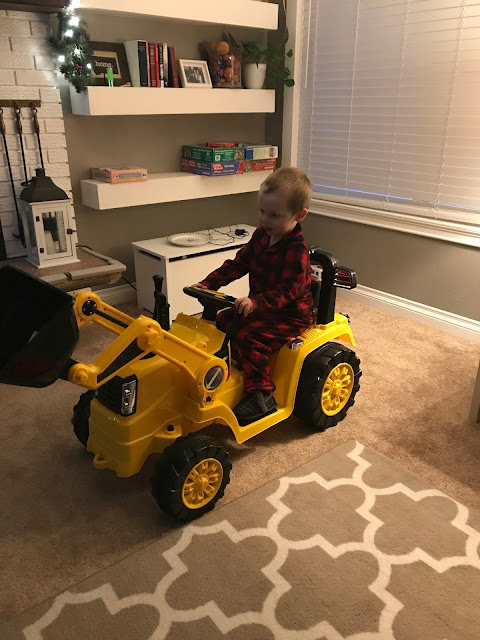 His gift from Santa! 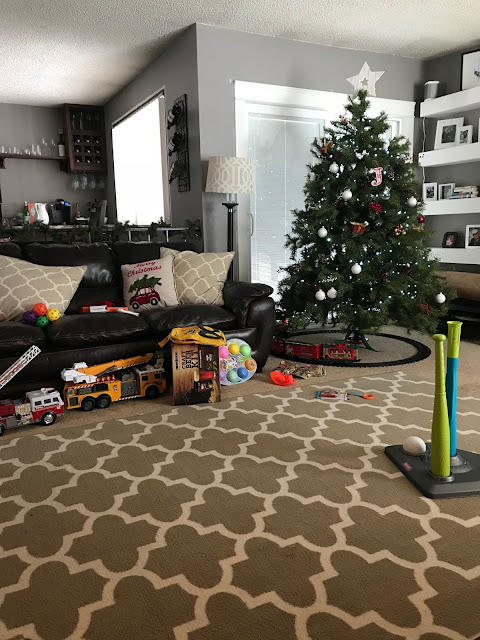 Half of the aftermath

Unfortunately our temps dropped to single digits (and negative single digits) and we got dumped on so #wiggydiggy couldn't take his new toy outside.

Instead he rode it up and down the hallway for two days! 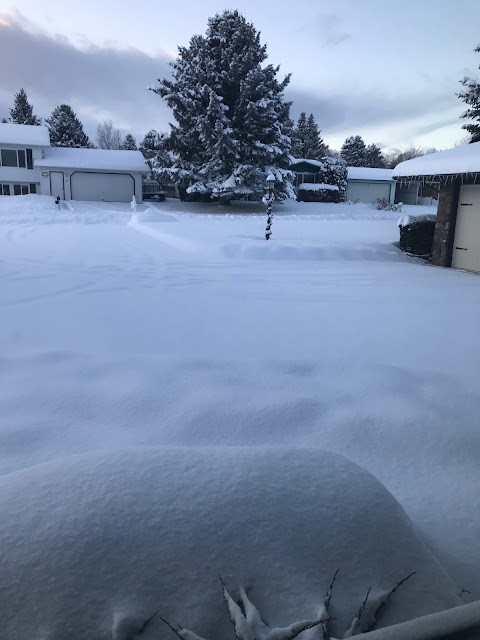 Another morning of a few inches of fresh snow 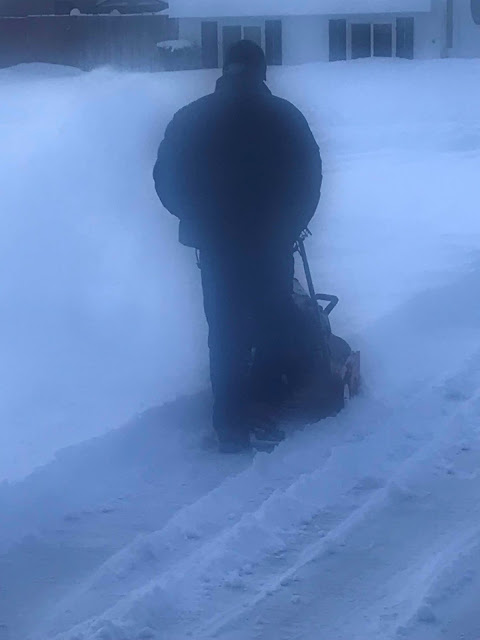 That snowblower was used daily, sometimes twice, for an entire week.  Snow much?

We had playdate plans with some friends that live out of town, but due to the snow we had to post pone until she could get dug out!  The snow in front of her house is up to her shoulder.......

New Years Play Date
We improvise when the weather gets too cold!  haha 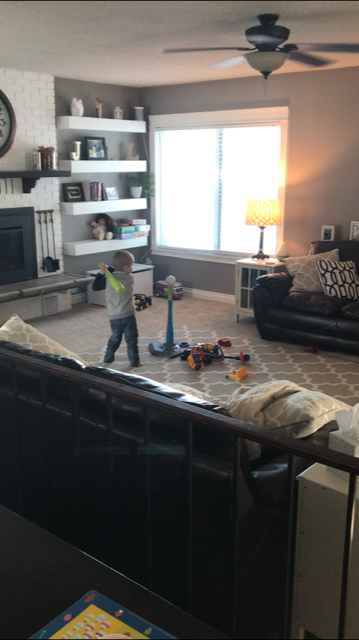 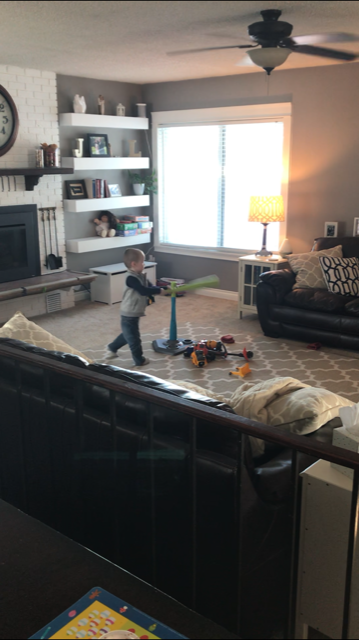 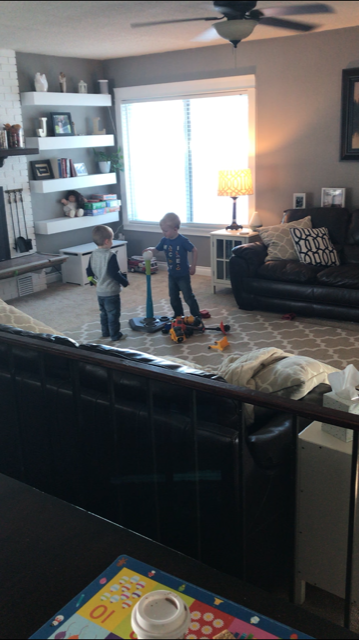 These two played "baseball" for the longest time.
Send prayers that nothing in my house gets broken beyond repair.

Email ThisBlogThis!Share to TwitterShare to FacebookShare to Pinterest
Labels: Holiday

Mostly because it's my birthday month.

But also because it feels like a fresh slate.  It's a great time to reflect, reevaluate and rejuvenate yourself.

This year my resolutions are short and sweet.

2. Continue to work out/move through my pregnancy and work on toning up after baby arrives.

3. Clean my clutter!
Somehow I became a product hoarder in my bathroom.
A travel size hoarder to be specific.
I was digging through my drawers just before New Years and came across 4 travel size dry shampoos that are all in various states of use.
Not to mention other hair treatments, makeup samples,
I'm not allowed to buy ANY product until I have run out of everything I have.
(I do have a list of products I want to try, so I'll just add items to that list until I've purged my current collection.)

In addition to this, our guest room is full of piles.  Piles of things I was planning on selling or storing.  Piles of boxes, piles of odds and ends.  Piles of CRAP.
In 2018, I want to clean out all of that clutter.

4. Focus on Family First
This is my happy 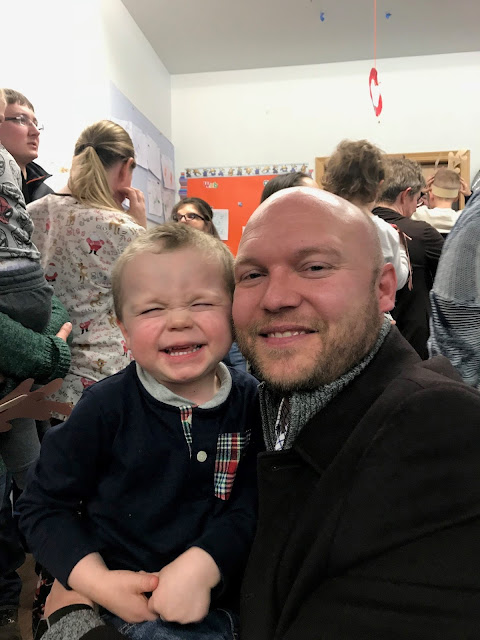 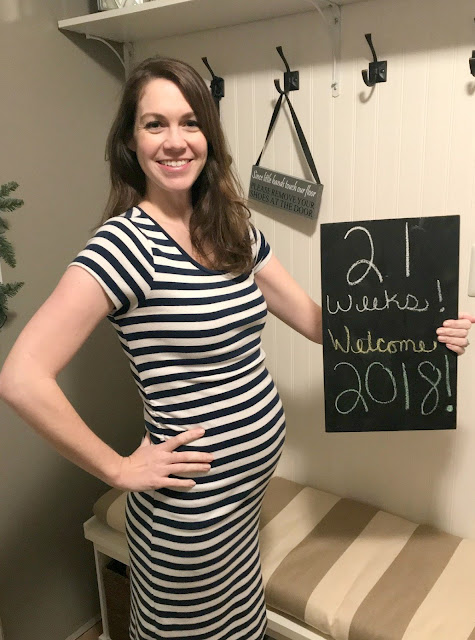 Sleep: The stomach virus really did a number on me last week and I'm still not getting restful sleep.

Best moment this week: Pampering week :)  Chopped a few inches off my hair yesterday and have a pedi date on Friday

Food cravings:   Nothing really.  I want specific meals from specific restaurants (but by the time I think about driving there, sitting down, ordering, waiting for my food, and then eating....I've lost my appetite).

Belly Button - In or Out:  Half and half.  The top half wants to poke out, but mostly lays flat.

Anything making you queasy or sick: Food aversion is still around.  I cannot stand meat and I have a hard time eating.

Wedding Rings - On or Off:  On. Somehow it's looser now than 20 weeks ago?

Workouts: Sticking to the usual.

Things that suck:  Slowly outgrowing my heavy winter coat.  We've had negative temps (as the high!) for a few weeks so I'm hoping it's going to warm up soon!

Things that don't suck:  Lots of belly kisses from #wiggydiggy 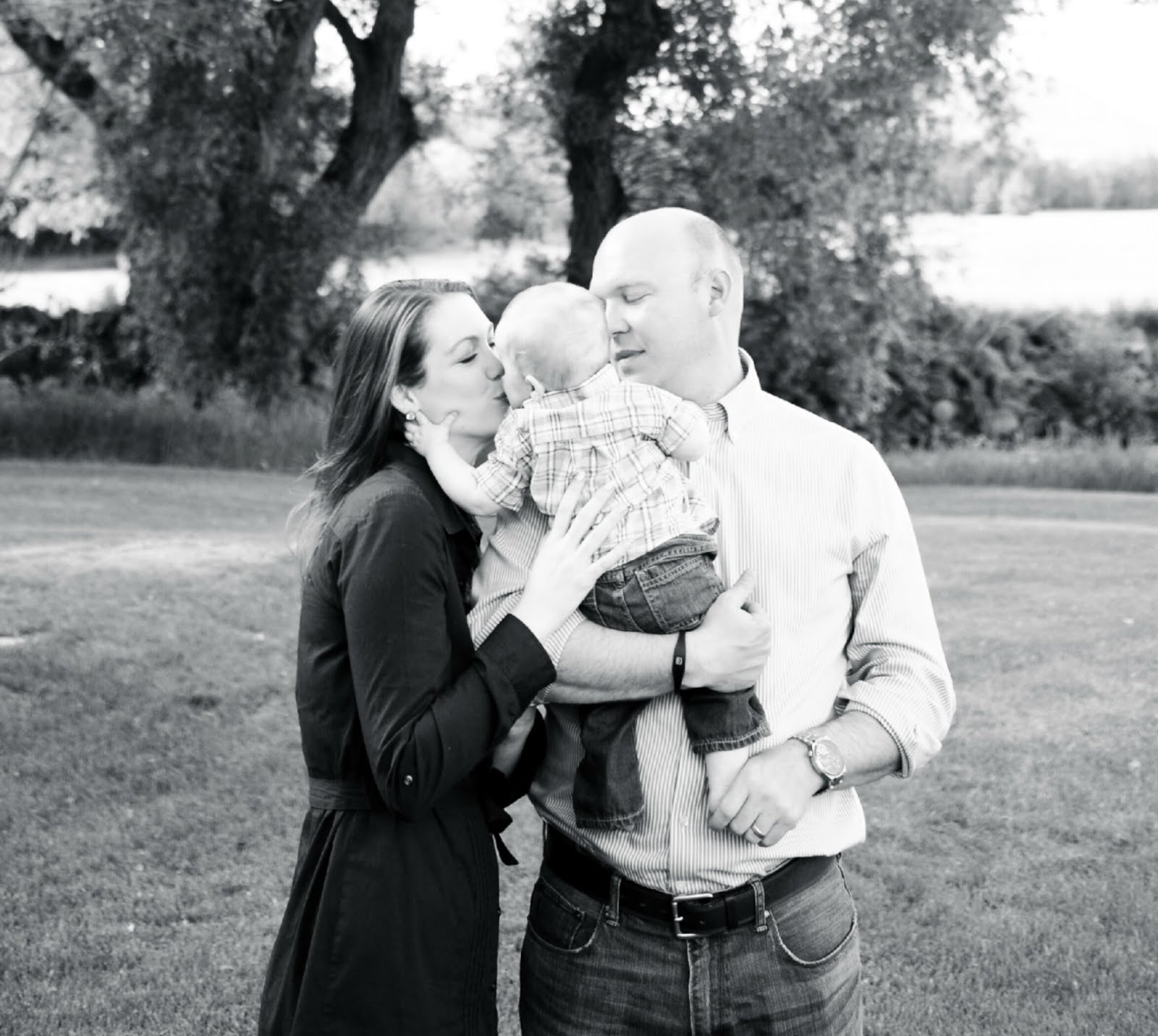